The city of Pierre, capital of South Dakota, is perched on a series of bluffs that overlook the Missouri River. The State Capitol, where members of the state government, including the governor, have their offices, sits atop one of the higher bluffs overlooking the city. The Capitol is a handsome, brass dome-capped structure built of native field stone, Indiana limestone, and Vermont and Italian marble. Begun in 1905 and completed in 1910, the building underwent restoration between 1976 and 1989.

The lawns around the building are planted with trees from multiple states, all with signs showing the species and origin. Capitol Lake, a man-made artesian lake that attracts thousands of migratory waterfowl in the autumn. When I visited, it simply reflected the blue sky and sunlight. Walking toward the lake, I passed two of the memorial sculptures that can be found on the grounds: the Fighting Stallion statue, which commemorates a much-loved governor, state employees, and local business leaders who died in a plane crash in 1993, and the memorial to South Dakotans who fought in World War II. The World War II memorial features bronze statues representing every branch of the service, all saluting the American flag and the list of names of the war dead. 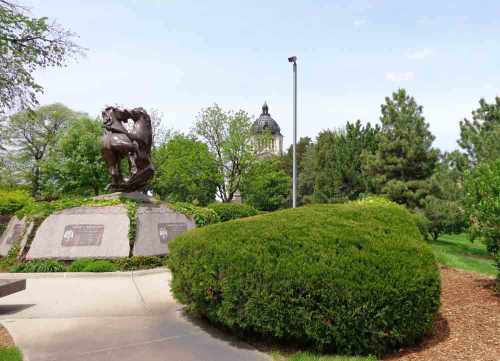 It was a lovely spot in which to stop and wander for a while, but I had a schedule to keep, so soon, I was on the road again.