The creation of grain elevators made it necessary to switch from measuring grain by bushels to measuring it by weight. If you look at the photo in the previous post of the Cracker Jack Company building, you’ll notice a large, flat area to the side. That was the bed of the  scale used to weigh wagons as they arrived, to determine how much grain they carried.  The wagon would be drawn up so it sat on that bed, and then the clerk would go into the scale house to check the weight.

The weights and measuring device, shown above, were inside the scale house. Once a wagon was situated on the wooden platform (just outside the window behind the scale), the clerk would check the weight on this scale, deduct the known weight of the wagon, and record the amount in the book, along with the price that would be paid for the corn.

Cracker Jack, like other popcorn specialties, is definitely part of the corn story (and popcorn has an entire chapter to itself in Midwest Maize, including the origins of Cracker Jack). You may wonder what that has to do with a museum in Atlanta, Illinois, but check out this tiny little white building. This was, in fact, the original headquarters for the two brothers from Germany who invented Cracker Jack. The building was donated to the Atlanta Historical Preservation Council to replace the original scale house, which had long since vanished (though the site and the scale were uncovered during excavation, so it’s in the correct place).

And here is the documentation about the Cracker Jack Company of Chicago, posted inside the building, along with a photo of the building in its original location. 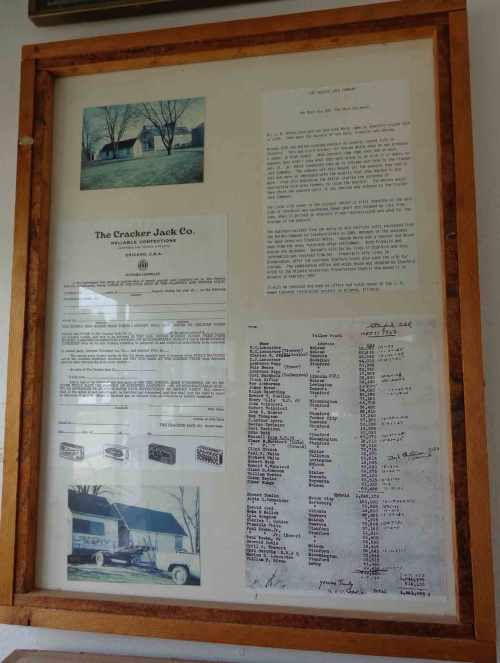 It’s astonishing to realize how modestly some big businesses started out.

This 1904 grain elevator in Atlanta, Illinois, has been turned into a wonderful museum that lets you explore an earlier version of the grain elevator-railroad combination. Listed on the National Register of Historic Places, it is the only fully restored wooden grain elevator in Illinois.

Corn would be brought to the elevator by horse-drawn wagon, and the wagon loaded with corn would be weighed and then pulled by the horses into the grain elevator. Inside, a clever device opened a trap door and tilted the wagon, dumping all the corn into the bin revealed by the open trap door.

A friend from Bloomington/Normal had joined me for the visit to the museum. The two of us had the place to ourselves, which offered us the advantage of having the docent’s undivided attention, so we were able to ask a lot of questions.

If you find yourself in central Illinois and want to visit this delightful museum, here is the Atlanta website, with information on the museum, as well as other sights and events in town: Atlanta, Illinois.

As I traveled around the Midwest, I quickly learned that a certain sign that a town’s economy is agriculture based (and most small towns in the Midwest fall into this category) was the presence of two things, always in close proximity to each other—train tracks and grain elevators. In these photos, taken in East Lincoln, Illinois (right next to Atlanta, Illinois), the grain elevators are right at the edge of the small “downtown” area. (In fact, one can almost judge the size of the town by the number and height of the grain elevators. This is a very small town.) 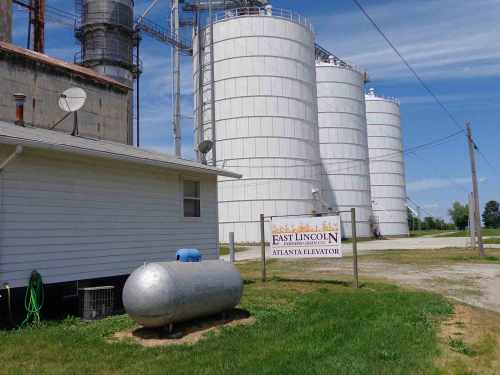 The train tracks are immediately behind them. Storage and transportation are the immutable twins of trade. Note that there is also a road, for trucks bringing corn in, with the train for transporting it out just behind it. The pipes stretching out from the towers can dump grain into a train car with astonishing speed. 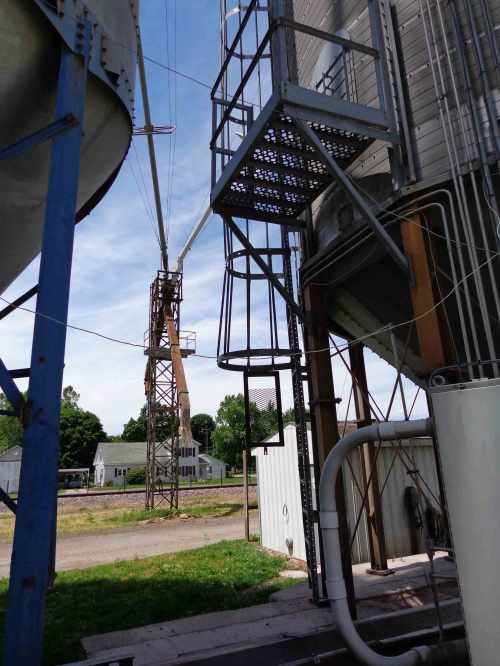 While agriculture was the focus of my research, that didn’t keep me from enjoying all aspects of life, culture, and history that I encountered as I explored. While I roamed about central Illinois, I was delighted to encounter—and even drive on a number of times—pieces of the historic Route 66.

Most Americans have heard of Route 66, the highway that stretched from Chicago to Los Angeles, if only from the song that suggests, “Get your kicks on Route 66.” I’d only previously visited the beginning of the road in downtown Chicago and walked along a short stretch in Albuquerque, New Mexico.

While Route 66 was not the first important road in the country, it was one of the first created for motor vehicles. Approved in 1926, it wasn’t entirely constructed and paved until 1938. Route 66 quickly became a key element of America’s love affair with car travel. The highway connected towns, and new towns grew up along the highway as its importance increased.

Drive-in restaurants, fast food, motor inns, and roadside advertising either had their genesis or came of age along Route 66. It became known as the “Mother Road,” a term John Steinbeck used for it in the Grapes of Wrath, as it became an important escape route for those migrating to California from the Dust Bowl states.

Automobile traffic surged following World War II, as prosperity returned to a country recovering from two wars and the Great Depression. The song mentioned above, written by Bobby Troup and recorded in 1946 by Nat King Cole, became a hit. In 1960, a TV show titled “Route 66” focused on a couple of heroes driving the highway in a Corvette, in search of each week’s adventure. The “Mother Road” was where people wanted to be.

But things change. Small towns slowed down traffic, so highways were routed around those towns—causing considerable hardship for those towns. More traffic, heavier trucks, faster cars called for wider roads and new construction methods that could withstand the onslaught. Today, Route 66 is no longer formally recognized as a U.S. Highway. It is a historic relic cared for by those who value history and the iconic nature of the road. There are segments and stretches that parallel new highways, but they hardly reveal the importance they once had. Still, one is pleased to encounter those segments and stretches—and remember what the highway once meant.

The photo above is of “downtown” Atlanta, Illinois, where Route 66 was once the main street through town. (Note the Route 66 sign on the wall visible over the car’s hood. If you click on the photo, it will enlarge, and the sign will be much clearer.) 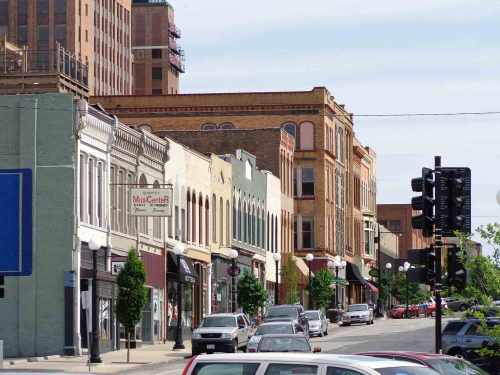 My research for Midwest Maize involved a lot of reading, but it also involved a lot of visiting places important to corn. My first “corn trip” started with a visit to Bloomington, Illinois. Iowa grows more corn than any other state, but McLean County, Illinois, grows more corn than any other single county in the United States, and Bloomington is the county seat for McLean.

Bloomington is old for the Midwest, with the first settlers arriving in the 1820s. It’s a lovely place to visit, and a good base of operations for exploring both agricultural libraries and sites significant to the history of corn. It is also the location of the McLean County Museum of History, which is housed in the old County Courthouse. The museum holds not only displays of the area’s past but is also home to splendid archives for anyone doing research on the early history of the Midwest. I spent several days immersed in the fascinating memorabilia and documents of an earlier age, from transcribed interviews to collections of letters. It was a splendid start to my research.

My first day in Bloomington, I discovered that the local farmers’ market is quite appropriately located in the streets and parkland that surround the museum—so I could pass through current farmers on my way to study their forebears. It pleased me greatly.

What Does the Farmer Say?

The farmers I met as I traveled the Midwest were invariably smart, and most were well educated, as well (smart and educated not being equivalent). I also found them to be warm and open. Hardworking probably goes without saying, at least for anyone who knows farming. Surprisingly, it turns out that more than a few are also talented—and funny.

A lot of interesting material about corn, farming, history, food, and the like will be shared in this blog, but before I get too serious, I thought I’d start with a lighthearted video that I think is an entertaining example of farm humor. Hope you enjoy this parody video from Kansas farmer Derek Klingenberg: What Does the Farmer Say?

“When tillage begins, other arts follow. The farmers, therefore, are the founders of human civilization.”

“Cultivators of the earth are the most valuable citizens. They are the most vigorous, the most independant, the most virtuous, and they are tied to their country and wedded to its liberty and interests by the most lasting bands.”

Why A New Blog?

I already have two blogs—so why create a new one? I like focus. Waltzing Australia is about the land Down Under. While The World’s Fare does look at food and food history, as well as travel and culture, it has a wide and generally international scope. This blog will center on the American Midwest. Part of the reason for this focus is that I’ve written a book and started a second book that have the Midwest as their centerpieces. The second book is just getting under way, but the first—Midwest Maize: How Corn Shaped the U.S. Heartland—is being released by the University of Illinois Press in February 2015 (and it is, in fact, already available for pre-order on Amazon).

However, this blog will not focus entirely on either the book or on maize/corn. It will encompass travel in the Heartland, culinary specialties, presidential libraries, historic sites and tourist destinations, living history venues and historic re-enactments, humor, nature, beauty, books, museums, recipes, videos (entertaining as well as educational), and anything else that falls into the category of “things I learned while studying or traveling around the Midwest.” It will also give me the opportunity to share a lot more photographs—because I took vastly more than the publisher could possible consider fitting into the book.

I have traveled all over the world, and I have loved what I have seen and experienced. However, the dynamic energy of the Midwest has quite captivated me. The history is as big as the region, and the people are as open. It has been a grand adventure, learning about and falling in love with the Heartland, and I’m delighted that it will be continuing. I hope you’ll join me.