From Mitchell, South Dakota, I was headed for North Dakota, but there were a couple of potential routes. Rod at the Discovery Museum in Mitchell had suggested following the Missouri River, and hence the “Middle Border” of the state. He said it would take me through an area without a lot of people, which I think he considered a warning, but I felt it was a bonus.

Heading west out of town, I crossed an area of alternating but always interesting landscapes. There was still plenty of farmland, but more rolling than what I was leaving behind. This was interrupted by bursts of bare, rounded hills that rose up suddenly, usually near waterways, by surprising views from the tops of rises, and deeply carved arroyos. I thought to myself that it was very evocative of the type of region one saw in old Westerns, and then reminded myself that it was not evocative at all—it was the reality—this was the old West.

I crossed the Missouri River at Oacoma (yes, towns also dotted my route). I began seeing more signs for historic venues, local wildlife, Native American Reservations, and Lewis and Clark sites. Then, turning northward on Route 83, I crossed into the Fort Pierre National Grasslands. The wide, rolling, treeless terrain was covered with short, green native grasses mingled with the taller, golden stems of last year’s growth. The Grasslands sprawl across nearly 200 square miles—and crossing it makes me think of those early settlers who must have been stunned by the seeming endlessness of it all. The sight of a few pheasants by the side of the road and a hawk circling overhead reminded me that I’d read that this was a popular spot with birders.

As I drove, I was reminded that wind is one of the reasons the Great Plains remained treeless. Since it was early in the year and the grass was not really tall enough to show the effects of the wind, I wasn’t seeing the telltale ripple that indicated wind, but I could certainly feel it, with occasional gusts pushing my car about. Nearing settlements on the far side of the Grasslands, a few flags snapping in the wind gave visual confirmation of the smart breeze that had been buffeting me.

The land became hillier again as the Missouri River’s meandering path brought it across the road again. I crossed the river again and drove into Pierre—pronounced “Peer” in SD—the state’s capital.

Before I depart Nebraska and the Great Plains, I thought I’d offer a movie recommendation—a film that can help you understand what it was like settling this area. The movie is “Heartland.” Released in 1979, it starred Rip Torn and Conchata Ferrell. Though it is shot in Wyoming, it is representative of the experience of settlers across most of the northern Great Plains. It is a beautiful movie that nonetheless makes clear the stark reality of early settlement in the late 1800s and early 1900s (the year at the beginning of the movie is 1910). It is well written, well filmed, and wonderfully acted. As good as it was to wander through the old buildings at Pioneer Village, this gives an even deeper, personal revelation of what the frontier was like only 100 years ago. This is just the trailer for the movie, but the film is so well regarded that you should have no trouble finding the full-length version.

For those who have seen only nice, soft, grassy sod being unrolled onto lawns, it may be hard to imagine what sod was like on the prairies and plains of the Midwest when the first settlers began trying to farm the region. It was not soft and definitely couldn’t be rolled up. It was almost a solid mass of tough roots and rhizomes extending four or more inches into the earth. The plants growing on the prairie were ideally suited to an environment where flood and drought alternated and brush fires were common. Deep, strong roots meant survival.

Sod was so tough that, before blacksmith John Deere created a plow that could cut through the sod, people often resorted to using axes to chop through the sod, to get to dirt where they could plant seeds. Farmers in the region became known as “sodbusters,” because they really did have to “bust” the sod if they wanted to plant anything.

However, sod could be useful. It was thick and heavy and nearly indestructible. In a region virtually defined by a lack of trees, this rough, thick, woody mat was often cut up and used as building material. In Nebraska, it became known as Nebraska marble. Soddies—houses built of sod—became a common sight on the early prairie. Walls inside and out would be “plastered” with clay, to keep dirt from crumbling into the house, and to protect the exterior from the weather.

I had read of sod houses, of course, when studying U.S. history, but at Pioneer Village, I had the chance to tour one. I thought that, for all its roughness, it was surprisingly handsome. Definitely “prairie style.”

It took eleven acres of prairie sod to make up the three-foot-thick walls of this soddie. I was surprised by how much cooler it was inside the soddie than it was outside. A sod house, with its thick, insulating walls, would have been ideal in this region of temperature extremes.

A bit of twisted barbed wire on Cathy’s farm reminded me that one of the little things that made a big difference on the prairies and Great Plains, when they were first being settled, was barbed wire. Fencing was fairly easy in the east, as trees were abundant, but out on the treeless plains, it often cost more to build fences than to buy the land. Plain wire fences had been attempted, but cattle easily broke through simply by leaning on them.

As with most inventions, lots of people were working on a solution, but one person came up with the idea that gained traction. In 1873, Joseph Glidden of DeKalb, IL, designed a simple, sharp, wire barb that was locked into a double-stranded wire. Glidden applied for a patent, which was issued in 1874. The acceptance was swift and international, and the impact was huge. On the Great Plains, it ended the era of the open range. Barbed wire also soon found other applications, besides farming, and by the end of the 1800s, it was widely used by the military worldwide.

Amazing what a difference a little twist of wire can make. 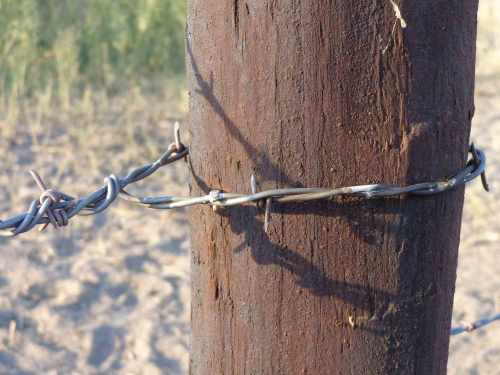 The View from the Bluffs

From the high bluffs that overlook the Republican River, we had a view of a broad stretch of land that was not merely picturesque but that also summed up both history and present reality for the Great Plains, and indeed for much of the rural Midwest: farms, grain elevators, trains, and water for transportation and irrigation. 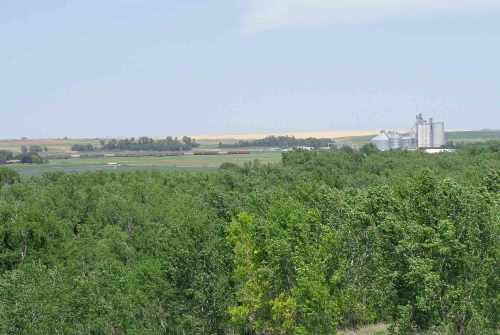 The sky was hazy with heat and dust. The wind was hot, insistent, and more than a little haunting. The sound of it coming across the prairie evoked for me tales of pioneers, early settlers, and drovers moving across the land.