Once the corn was husked, getting the dried corn off the cob was the next task. It was not an easy one, and generally involved shovels or bayonets or other sturdy tools for attacking the tenacious kernels. Farmers often left corn on the cob until it was needed, because trying to do large amounts at once was so daunting.

Then, in the 1820s, shellers were created that made the task less difficult. These devices were modified over the years, but the fact that they soon appeared on almost every farm shows how vital they were. One person could operate the sheller, but ideally, two people would work together, one feeding the cobs into the chute, and another turning the crank. Corn kernels would drop out from the bottom and cobs would be spit out of the front. The bonus here was that the cobs were in good shape, which meant they could be used for anything from a corncob pipe to corncob jelly. They were also popular as kindling for stoves, when those became available.

Here, amidst numerous other “labor saving devices” on display at the Pioneer Village, are two corn shellers—the blue device with the yellow crank wheel and the green one with the red crank wheel.

Picking the corn was one major task that occupied farmers in the past, but that wasn’t all that was involved in preparing the corn for use. Farmers and their families had to husk it. (Or shuck it —husking and shucking were both terms that referred to pulling that tenacious wrapper off the ear of corn.) Husking may not sound terrible, but it’s important to remember that we’re talking about thousands of ears of corn. When farming communities began to grow, husking could be turned into a party, with all the neighbors gathering to husk each others’ corn, but it was still a lot of work.

One bit of technology designed to aid in this task, which early settlers picked up from Native Americans, was the husking (or shucking) peg. This was a piece of leather and a wooden peg that could be used to protect the hand, especially the thumb, from the sharp edges of the dried cornhusks. As time went by and harvests got larger, people devised more and better pegs and then hooks and then gloves for husking corn. These advances made it possible to husk greater amounts of corn. In one of the barns at Pioneer Village, where a splendid in intriguing variety of farming equipment was on display, I came across this collection of husking devices, from pegs (upper right) through a wide range of hooks and gloves. (Clicking on the image will give you a better view of the devices.)

The alternate name for the Great Plains is the Great American Desert. As a result, farming on the Great Plains, while always possible to some extent (though not always successful), didn’t really become as big as it is today until irrigation was introduced. While even today, irrigation is not universally used, it is more widespread than it was in the first half of the 20th century.

Of the types of irrigation practiced today, while I saw a few places with drip lines, center-pivot irrigation systems—or just “pivot” for short—were what I saw most commonly.

The pivot was invented in 1947-48, and at Pioneer Village, they had an early example of this revolutionary system. (Revolutionary because it not only watered automatically, but also because it actually made far more efficient use of water resources than earlier methods.) 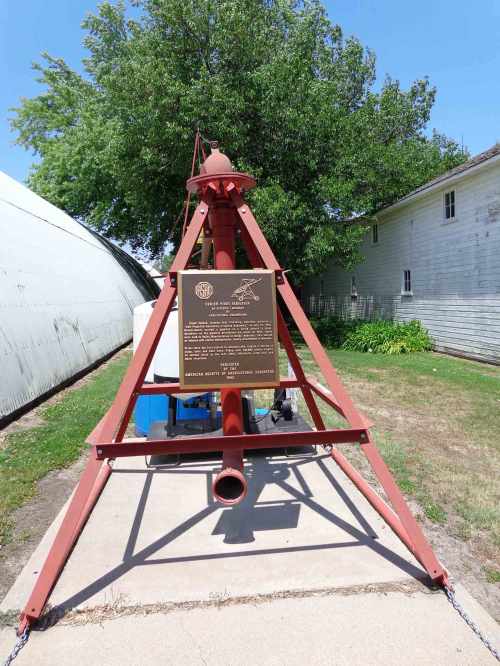 In case you wondered why, when you fly over farming areas, you see a lot of green circles on the ground, this is why—the pivot turns on a central point, watering a circular area. They do make pivots now with an arm that can extend outward at the corners, but these systems are expensive, so they are not the sort of thing you replace simply because there is some new tweak that looks good.

There is a lot more about the invention of the pivot and its impact in my book, Midwest Maize, but I couldn’t resist at least showing the early version of this system.

For those who have seen only nice, soft, grassy sod being unrolled onto lawns, it may be hard to imagine what sod was like on the prairies and plains of the Midwest when the first settlers began trying to farm the region. It was not soft and definitely couldn’t be rolled up. It was almost a solid mass of tough roots and rhizomes extending four or more inches into the earth. The plants growing on the prairie were ideally suited to an environment where flood and drought alternated and brush fires were common. Deep, strong roots meant survival.

Sod was so tough that, before blacksmith John Deere created a plow that could cut through the sod, people often resorted to using axes to chop through the sod, to get to dirt where they could plant seeds. Farmers in the region became known as “sodbusters,” because they really did have to “bust” the sod if they wanted to plant anything.

However, sod could be useful. It was thick and heavy and nearly indestructible. In a region virtually defined by a lack of trees, this rough, thick, woody mat was often cut up and used as building material. In Nebraska, it became known as Nebraska marble. Soddies—houses built of sod—became a common sight on the early prairie. Walls inside and out would be “plastered” with clay, to keep dirt from crumbling into the house, and to protect the exterior from the weather.

I had read of sod houses, of course, when studying U.S. history, but at Pioneer Village, I had the chance to tour one. I thought that, for all its roughness, it was surprisingly handsome. Definitely “prairie style.” 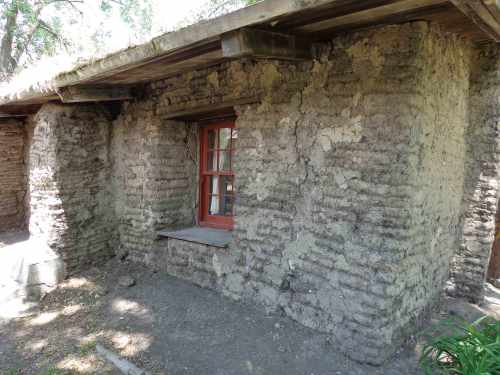 It took eleven acres of prairie sod to make up the three-foot-thick walls of this soddie. I was surprised by how much cooler it was inside the soddie than it was outside. A sod house, with its thick, insulating walls, would have been ideal in this region of temperature extremes.

Welcome to the Village

Outside the indoor museum, one enters the “village” itself—twelve historic buildings around a broad, tree-shaded lawn. Ranged around the “town” are other relics from the past, including some early forms of now-important farm equipment.

Each building—barns, houses, church, stores, schoolhouse, Pony Express station, print shop, doctor’s office—is home to its own collection. The toy store is filled with antique toys. The barns are crammed with tools and inventions no longer at home on farms. The shelves and counters of the general store are crowded with the goods from bygone eras. The schoolhouse has all its original furnishings. The collections are fascinating, but the buildings themselves are wonderful, as well. They are all original buildings that have been rescued, moved here, and restored.

Before moving out into the “village,” we spent a fair amount of time wandering amid the wonders of the sprawling, indoor museum. One can watch the progression of technology over more than 100 years, in fields as disparate as art, transportation, farming, and food preparation. It’s truly a remarkable collection. There are wagons and coaches, more than 350 antique cars, more than a dozen airplanes, and 100 antique tractors, plus toys, sculpture, and machines for every possible task. Fabulous.

One fact I found fascinating was the extent of operations for moving freight. Before Henry and Clem Studebaker made cars, they made huge Freight Wagons, and these wagons moved a tremendous amount of goods (from trade goods to simply people moving households) along the Oregon Trail. The operation of one freight company alone — Bussell, Major, and Waddell — required 6,000 wagons and 75,000 oxen to move freight over the trail. Remarkable. And not the sort of thing one ever sees in schoolbooks.

There was a sign that explained that the buckboard wagon paralleled today’s station wagon or mini van. It could accommodate a family, but the seats could be removed to make room for grain bags or other supplies.

Having already done enough research on popcorn to know that C.C. Cretors would be a major part of my chapter on popcorn, I was delighted to see one of the early Cretors popcorn machines/wagons, with the little Tosty Rosty Man looking a bit the worse for wear, but still at his station, ready to turn the crank if the steam got turned on again.

Driving about 50 miles east from Arapahoe, through an alternating landscape of fields and small towns, we came to the small town of Minden, Nebraska. Like all other small towns in this region, it is marked by grain elevators and railroad tracks. However Minden is also home to Pioneer Village, an indoor-outdoor museum that has been named “Best Pioneer History Collection” for several years running.

If you couldn’t tell from my lengthy description of the Living History Farms in Iowa, I love places like this. That said, I love anywhere that allows me to interact with life, past or present, from a working farm to a historic home to a Revolutionary War reenactment. So I was delighted with this place.

Pioneer Village represents the vision and life work of Harold Warp. It claims to be the largest private collection of Americana—and I have no reason to doubt that. The complex is home to 50,000 artifacts that cover the full spectrum of the region’s settlement and development, all lovingly restored and carefully grouped by function and era. There is also a splendid art gallery. All this is housed in more than two dozen buildings, many of which are, themselves, historic artifacts. It offered a splendid opportunity to see things I’d only read about or seen in photographs – and the next few posts will show more details. 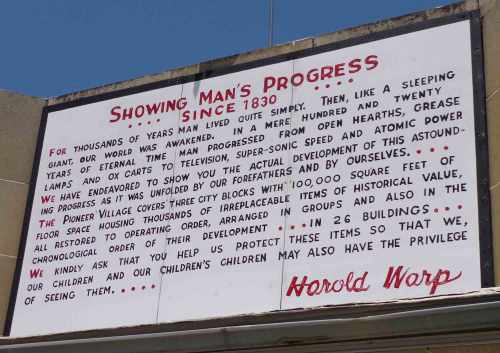 Don’t know if you’re planning a trip across Nebraska, but if you are, I’d recommend this as a way to get “up close and personal” with a lot of the history of the Great Plains.  http://www.pioneervillage.org/