Welker Farms and the Beauty of Farming

I’ve decided to adopt Montana as part of the Midwest. The type of farming, the love for the land, and the history of families working together to feed the world make it feel similar to what I’ve discovered while traveling around the Midwest. And Montana is a next-door neighbor of the northern Midwest.

On the 100-year-old, family-owned and -operated Welker Farms in northern Montana, this love/land/family combination is made gloriously visible through the efforts of fourth-generation farmer Nick Welker, who, in addition to farming, creates glorious videos that reflect the majesty of the location and of the work. He also creates fun video of rebuilding farm equipment–because keeping things going is a big part of successful farming. But in this video, it’s the epic vision of harvest season on the sprawling Welker property that is recorded. This is a really beautiful piece of work.

If you enjoy eating regularly, it’s good to remember that this is why. Because 80 percent of all crops in the U.S. are grown on family farms. They may be big farms, like this one, but they are operated by a handful of people who love farming and have, in most cases, been doing it for generations.

October on the Farm

Another video from the Peterson Farm Brothers offering insight into what goes into raising our food.

June on the Farm

Another month on a Kansas farm, thanks to the Peterson Farm Brothers.

Not everything was done by hand at this point. A machine had been devised that could cut the stalks near the base and bind them into clusters. These clusters of stalks could then be picked up and piled into corn shocks—those golden hills of corn that are so evocative of the harvest season. 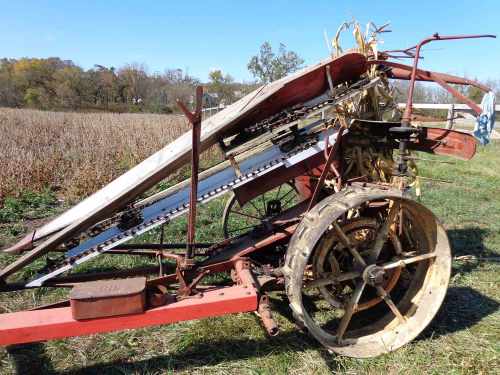 However, though shock binders, as the machines were called, would help with the work, it wouldn’t be until the 20th century was more than half spent that real changes to harvesting corn would come into use. So the teepee-shaped corn shocks would be around for a while. 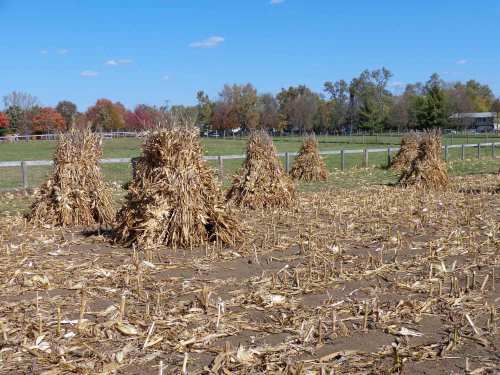 On a sunny, fall day, I headed to Kline Creek Farm in West Chicago. This is a restored farmstead that dates to the 1890s, and like many such places, is populated with splendidly well-informed, historically costumed interpreters who can introduce you to the period. 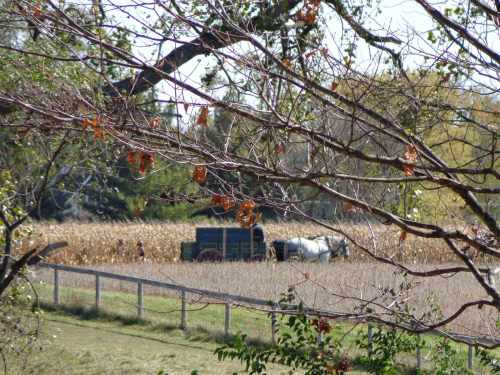 Though I was looking forward to exploring the entire location, I had picked the time of my visit to coincide with the Corn Harvest. Before we would be allowed into the fields, to pluck the golden cobs from their stalks, we were treated to “Corn College,” a brief lecture on how farming in the 1890s compared to present day.

In the 1930s, hybrids were introduced. At first, in the rush to make things bigger and better, corn was bred that was too tall, with ears that were too big, so stalks fell over. But they eventually got it right.

Today, farmers plant as much as 36,000 seeds per acre, and look for yields of 200 bushels of corn per acre. Not only does each plant produce more corn than the older varieties, but plants have also been bred to tolerate being closer together, so more can be grown. 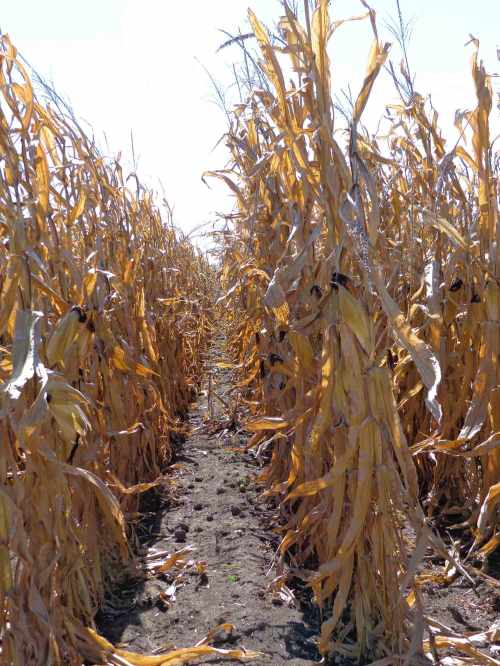 Makes it clear why corn is called a “row crop.”

But the old-style fields at Kline Creek, with their wide rows, were handsome and sunny, and I stopped to photograph them as we walked into the fields to harvest the corn. We harvested by hand, as was done well into the 1900s. Snap the ear off the stalk, pull off the husk, and toss the corn into the horse-drawn wagon that kept pace with our progress across the field. We only harvested a couple of rows. Had to leave some for the visitors who would come throughout the week. 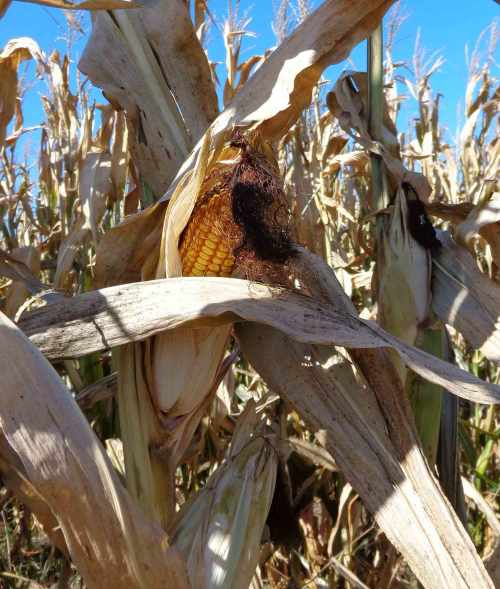 After the tractor, the next big advance was the self-propelled combine—a harvesting machine that you drove, rather than dragging it behind a tractor. The modern combine looks more like a space station than a piece of farm equipment. The combine on display at the Pavilion is fitted with a wheat head—a front end that harvests wheat. In 1954, John Deere introduced the first corn head—though combines then looked more like golf carts, and the corn head only harvested two rows at a time. Things have definitely changed since 1954. 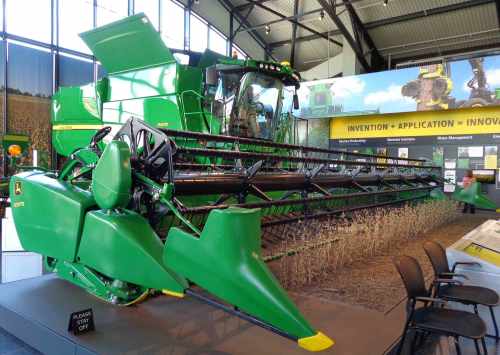 And just so you know what a corn head looks like, here’s a photo I took from the cabin of an International Harvester combine during harvest time in Ohio. You’ll note that it’s quite a bit different from the wheat head, and is clearly designed for row crops.  (I think this photo also shows why being in the middle of a cornfield is sometimes compared to being at sea.) 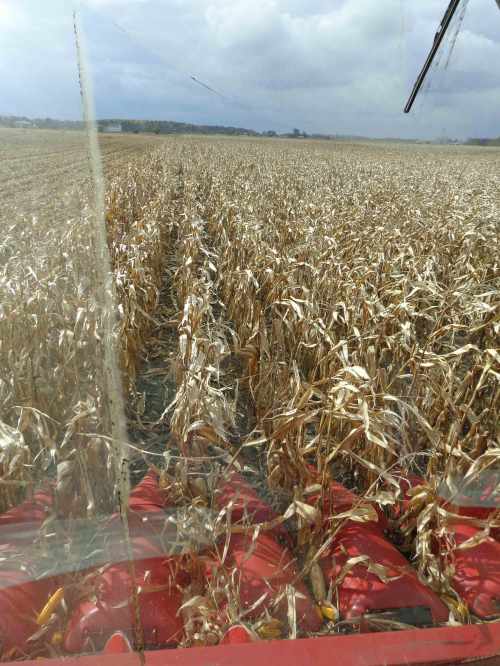 Traveling around the Midwest, one learns that color matters. There are a number of manufacturers of harvesting equipment, but the two “species” one encounters most commonly in the Heartland are made by John Deere or Case/International Harvester. Green with yellow means John Deere farm equipment. (There are other green combines in the world, but one quickly learns the precise shade of green that means John Deere for farmers.) Red usually means International Harvester (and the combine in the second photo is IH red). It can also mean Massey Ferguson, but I never saw one of their combines on a corn farm. People are as divided and as loyal as any car owner you’ve ever met. Yellow is pretty much reserved for earth-moving equipment, even when it’s made by John Deere. (Hence, a book on the history of the earth-moving equipment industry is titled Yellow Steel.)