You may know, especially if you’ve heard me speak or read my books Midwest Maize or Pigs, Pork, and Heartland Hogs, that getting corn to market was most commonly handled one of two ways. It could be fed to pigs, which could then walk to market. (This led to pigs being referred to as “cornfields on legs.”) Or it could be converted to whiskey. Of course, in addition to getting the corn to market, albeit in an altered state, the advantage of both of these approaches was that it gave those growing the corn both meat and drink.

For those who might be interested in how corn got converted to whiskey back in the 1700s, here’s a video from Townsends demonstrating the entire process. What was being created on farms of the time would not generally be elegant, aged whiskey, but rather a strong, clear, “white” whiskey. So not necessarily good whiskey, but it got the job done.

The Peterson brothers created a video a few years back that when viral – Farmer Style. As a result, I interviewed Greg Peterson, the oldest of the three brothers, for my book, Midwest Maize, because it reflected the attitude of younger farmers—the folks who will be feeding us in the future.

Then, in my book, Pigs, Pork, and Heartland Hogs, I feature the National FFA, which is an organization that offers great opportunities to students, both in rural areas and cities.

So when the Peterson brothers came out with a new video that, if shared, will benefit the National FFA—supported by Pioneer, which also gets a mention in Midwest Maize book—I could hardly fail to respond to the offer. So here is the video. If you choose to share it, future generations will benefit.

If you’ve read my book Midwest Maize, you’ll know that there was a massive oyster craze in the Midwest during the mid-1800s. (And if you haven’t read it, know that there really is a connection between oysters and corn at this time.)

Anyway, once canning existed and began to become more widely available (even though cans were being cut and assembled by hand), thanks to the country’s extensive train networks, luxuries from the East Coast began to flood into the Heartland. People who had nothing else in common shared the passion for oysters, and oyster bars popped up in both large and small towns. Here is the evidence of this craze from Old Cowtown Museum.

In both Midwest Maize and Pigs, Pork and Heartland Hogs, I wrote about Fair Oaks Farms. This is a remarkable operation where the owners not only focus on safe, sustainable food with a low carbon footprint, but also want to educate the public about where food comes from. While my books look at farms of many different sizes, this is among the largest–and yet, they are so forward thinking that their carbon footprint is half that of smaller farms.

In addition to being splendidly effective farmers, they are also exceptional educators.  If you happen to live anywhere near northern Indiana, or if a driving trip will take you through the area, you definitely want to stop here. And know that if you like cheese or ice cream, you can see both being made –and can purchase an abundance of both (though other food is available, as well–but seriously, if you like cheese, this place is amazing).

Here’s a video I found in which the founders talk about their vision for the farm and why they developed it the way they did. Hope you enjoy it. And hope you get to visit.

At the Iowa State Fair

I have for several years followed a British YouTube cooking show called “Sorted.” It’s good fun and offers some imaginative recipes. But every once in a while, they wander off to show us something outside the kitchen — usually around London, but sometimes in the U.S. This video was published on Oct. 14–which was just two days before my newest book was released–Pigs, Pork, and Heartland Hogs — a book that looks at the history of pigs, as well as current trends in raising and consuming pork. The book covers about 12,000 years, but it has a fair bit about the culture of Iowa–and the Iowa State Fair, the destination for the Sorted crew in this video. And I was happy to see that they feature some of the special dishes mentioned in the book, including the Iowa Pork Chop, the Pork Chop on a Stick, and the Iowa Pork Tenderloin Sandwich. (The book even includes a recipe for this last item.) So I was delighted at both the timing and the content of the video, as it makes it possible to share a bit of the noisy joy of a state fair — and a look at Iowa’s pork culture. (And a bit of Iowa’s corn culture, as well — which features in my book Midwest Maize. Iowa is # 1 in both corn production and pig raising.)

So here are the four Sorted lads enjoying a bit of Midwestern hospitality and food at the Iowa State Fair.

While this blog is titled Midwest Maize, after my first book of food history, it will have to do for future food history and Midwest-oriented books, as I can’t quite imagine starting a new blog with every book.

Which is why I’m using it to introduce my next book: Pigs, Pork, and Heartland Hogs: From Wild Boar to Baconfest. The book won’t be out for a couple of months, but it is already on Amazon, with a few reviews and the option of pre-ordering. So in case you thought I might have stopped studying after I wrote about corn, I didn’t.

Pigs were once known as cornfields on legs, because the easiest way to get pigs to market was to feed it to pigs and then let the pigs walk to market. So the connection between pigs and corn in the Midwest dates to the earliest settlement of the region. However, the history of humans and pigs dates back a lot longer than that–current estimate is 12,000 years of association. So there are a lot of tales of pigs through history, from the Celts inventing bacon to the Etruscans leading herds by playing trumpets. But the book isn’t all history. There are visits to farms and interviews with experts ranging from swine technicians to butchers and chefs to waste management specialists. There are some iconic regional recipes. And there are lot of the kinds of fun facts that make food history so enthralling.

On top of entertaining folks, I’m hoping this book will contribute to closing the gap between what people think about food and how it actually gets to us. There are a tremendous number of really good, decent, dedicated people working very hard to make sure you don’t starve. Come and meet a few of them in my books.

You can check it out here: Pigs, Pork, and Heartland Hogs.

I Get To Talk Corn on the Radio

Radio station WDCB FM (90.9 in Chicagoland) invited me to talk about corn for their Sunday-morning show First Light. The interview actually lasted quite a bit longer than the 15 minutes that finally got broadcast, but I think it still gets across that corn is a very fun topic. (Though I was surprised the show’s charming host, Brian O’Keefe, left out the story about the invention of corn puffs.) If you have any interest in hearing what I shared, they’ve posted the broadcast on their website: https://www.wdcbfirstlight.org/news/2017/9/24/youll-see-corn-differently

Corn Oysters were sufficiently iconic in the Midwest of the mid-1800s that I include a recipe in my book Midwest Maize. But the fritter recipe sounds like a fun treat. Think I’ll try those out. And who knew there was a Corn Fritter Day? Remarkable.

Chop corn, drain, and add dry ingredients mixed and sifted, then add yolks of eggs, beaten until thick, and fold in whites of eggs beaten stiff. Cook in a frying-pan in fresh hot lard. Drain on paper.

And Corn Fritters have

Why??? Why, are they ashamed of being corn? Or is the fritter part too frivolous? Do they just want to be taken more seriously?  Or is it role-playing, cos-play for fritters??

They are also known as….

The Eric Hoffer Awards for 2017 were announced yesterday. This is an award designed to recognize exceptional writing from small, academic, or independent publishers that don’t usually get the attention that the big publishing houses get. While Midwest Maize didn’t get the top prize, I was awarded an Honorable Mention, which, given the thousands of books submitted, is still gratifying. 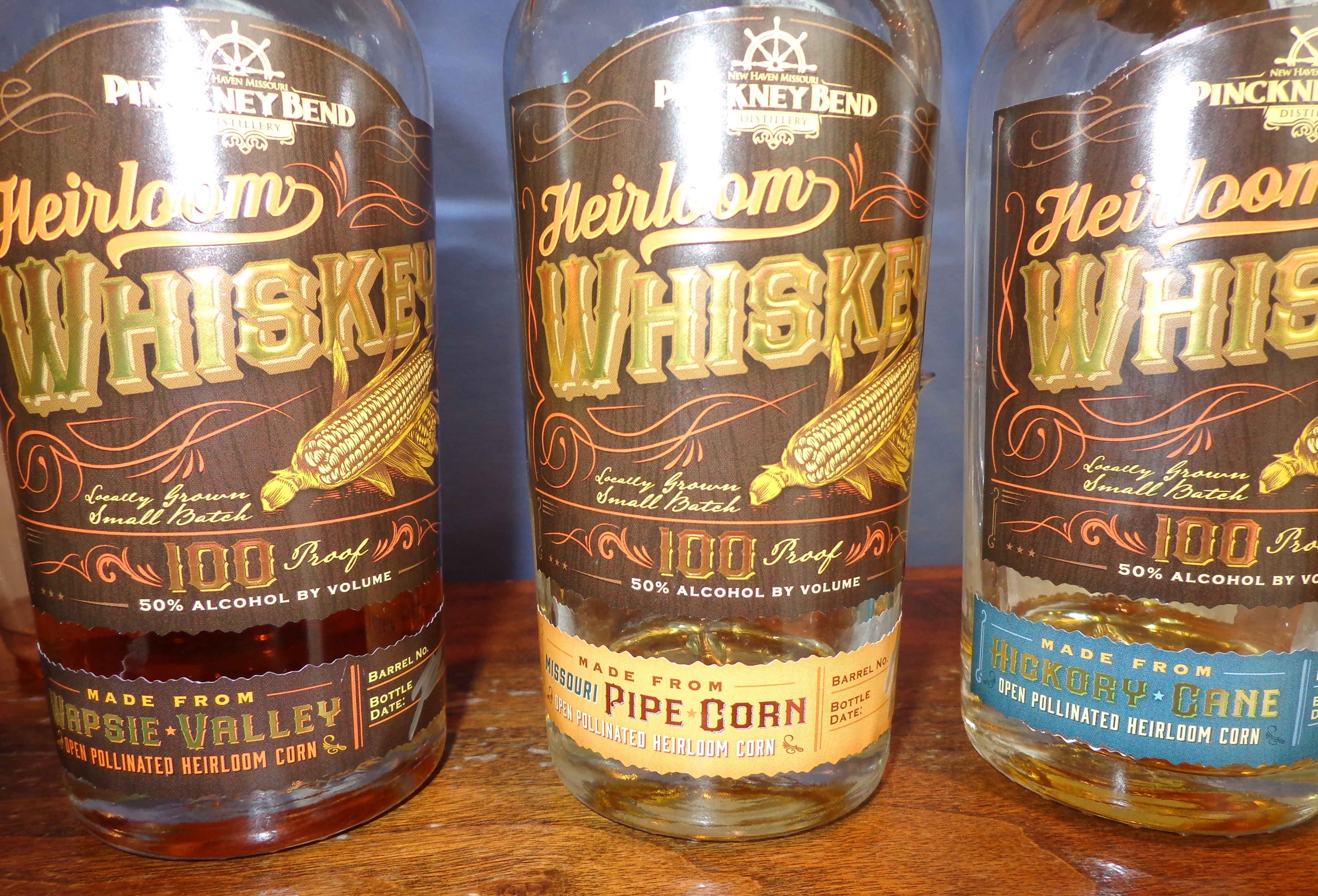 Almost exactly a year ago, I posted about having heard from a distiller in New Haven, Missouri. Ralph Haynes of Pinckney Bend Distillery had left an enthusiastic review on Amazon of my book, Midwest Maize, and had then contacted me about my book having encouraged him and his partners in their pursuit of whiskeys made from heirloom corn, which are recreating the tastes of the 1800s. (Three bottles of this heirloom corn are shown above, with the type of corn identified on the bottom label. The Wapsie Valley was my favorite.) At the time, he suggested I come down to New Haven, to check out the whiskey and to enjoy some of the very picturesque area—and maybe even do a presentation about corn. 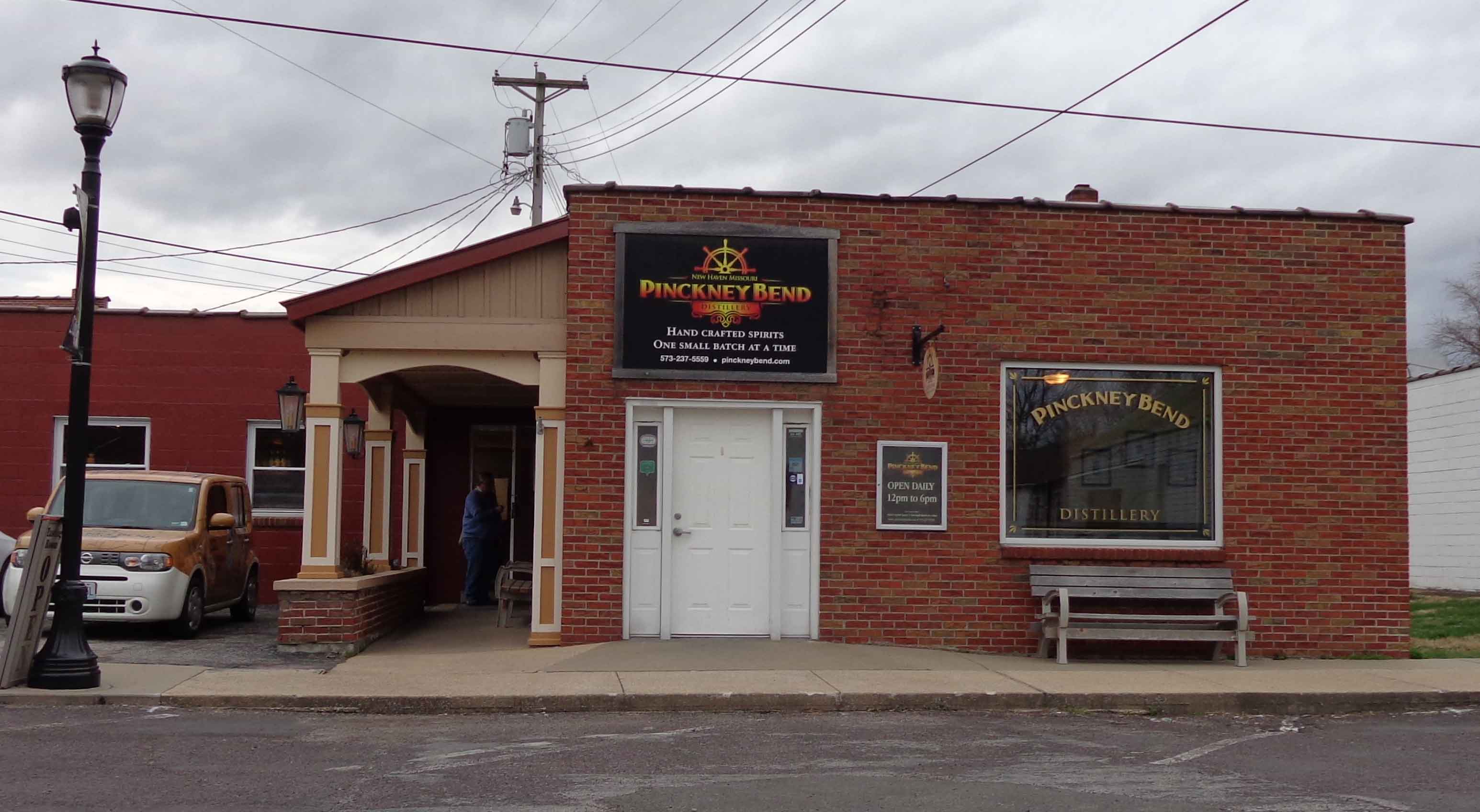 Last year, it seemed unlikely that I’d get there, but when a conference appeared on my calendar that was taking me about that far south, though a bit to the east (Louisville, KY, to be exact – more on this on my The World’s Fare blog), I thought I might come home by way of Missouri. Ralph’s wife, who managed the local library district, arranged for the offered presentation opportunity, so I got to do my “How Corn Changed Itself and Then Changed Everything Else” talk for a most appreciative local crowd.

The distillery is just a few yards from the Missouri River, at the end of a street of historic buildings and just off the Lewis and Clark Trail. So I was delighted with the location, even without having a distillery close at hand. And within the distillery, in addition to gleaming stills and colorful heirloom corn varieties, there were maps and tales of the meandering Missouri River and steamboats that were sunk by the river’s snags and bends. (In the photo below, the river feature called Pinckney Bend is in the center, and you can see that, even when the river changed its course, it still “bent” at this spot.)

There were also a lot of antiques related to corn growing and processing, including shellers and jabbers, which I talk about in my book, so I was really having fun. Plus the modern equipment is remarkably handsome. They have two stills, one slightly larger than the other. The one below is the smaller of the two stills.

Of course, I did get to try some of the elegant whiskeys produced by Pinckney Bend, as well as their gin, and I toured their facility. But Ralph had also planned a few other things for me to see, both with him and on my own. So it was a lovely few days of exploring—as you’ll see over the next few posts.