The View from the Bluffs

From the high bluffs that overlook the Republican River, we had a view of a broad stretch of land that was not merely picturesque but that also summed up both history and present reality for the Great Plains, and indeed for much of the rural Midwest: farms, grain elevators, trains, and water for transportation and irrigation.

The sky was hazy with heat and dust. The wind was hot, insistent, and more than a little haunting. The sound of it coming across the prairie evoked for me tales of pioneers, early settlers, and drovers moving across the land.

The first settlers in the region had to grind corn by hand. In fact, one of the huge benefits of corn was that it could be picked and processed by hand comparatively easily, at least compared to other grains. It gave farmers a degree of independence, because they could settle in areas that did not yet have grist mills.

However, in time, once there were enough people to justify the trouble and expense, mills would be built. This necessitated the transportation of millstones—a remarkable feat in the early days, given the size of the stones. These two stones, on display in Atlanta, Illinois, weigh 1,100 pounds each. As noted in the inscription, the mill that used them began operation in 1848.

And for those who might wonder what a grist mill is, it’s a mill that grinds grain. “Grist” is grain that has been separated from its chaff and is ready for grinding. Here’s a sample of grist from the historic Graue Mill, which is located in Oak Brook, IL. 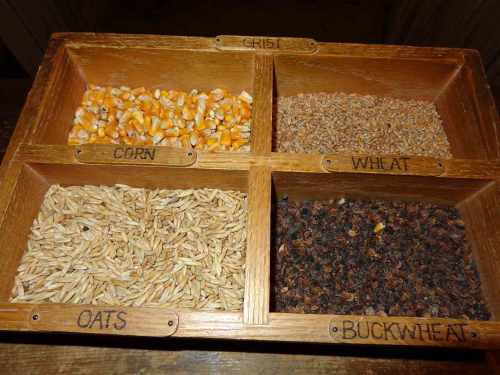